That evening, I was walking around the neighborhood where I grown up, on the edge of Saint-Petersburg, Russia. In that moment, there was no bypass highway near and in the closest town called Vsevolozhsk were not so many people. Therefore the road passing through my neighborhood out of Saint-Petersburg was not so uploaded and there were quiet, warm, green and fine. I don’t remember with whom I was walking: maybe with my girlfriend, or my best friend, or perhaps I was alone. But I recall that I was in the calm and pacified mood. I was 22 and the autumn just began (September 11). Everything good seemed possible to happen and the whole life was ahead. I felt myself full of powers, ideas and hopes.

I don’t remember what time it was when I came back home. Maybe it was around 5 p.m. I recall when I entered the apartment my mom immediately called me to the living room. When I came in, “Look what’s happening in America!” she said. There was some catasrophe movie on TV: a huge skyscraper and clouds of smoke belching from its top third.

– What’s the movie? – I asked mom.
– That’s not a film! It’s happening in New York City right now! – there was not complete confidence of feelings in my mom’s voice. But at the same moment, she was sure about happening because she knew what she was watching. It was breaking news. Concerning what I thought, it was even more entangled: “That can’t be! That’s not real! It’s just a movie!.. Or…” The picture of the skyscraper got smaller and the most part of the screen took a view of television studio and a news presenter woman. She absolutely serious told about the tragedy details.

Suddenly, news presenter anxiously said that there’s another plane coming to the second tower. And then I saw live the Boing crashed into the building and blowed up…

“No… IT CAN’T BE REAL!!! There are people. How is this possible?!” – some rubbish like that swept through my mind…

I sat in the arm chair all that night forgetting to change. I won’t tell lies like “I was crying and wringing my hands in grief”. Despite of all that impossible horror it still didn’t occur to me or to someone I knew personally. It was happening far away in the fantastic country called America from Hollywood movies. It was only later I realized all this hell, after I read articles and researches, watched amateur videos, fiction and documentary films (like “Zeitgeist”). And especially Bruce Springsteen’s songs from his “The Rising” record helped me to realize it. Thanks to all mentioned I could imagine myself there at least a small degree. And then became tears, despair, incomprehension, fear and sympathetic to the pain in the chest to that people.

Who would not say, how justify his indifference and even spite – no, this should not happen. To nobody, in any country. And never convince me the one who thinks it retribution. No!..

My favorite musician Peter Gabriel said excellent words in yet 1992: “I read somewhere that the measure of man’s civilization is where he places the line between them and us. When you put people in the box marked them, you can kick them around a lot more easily than you can when they’re in a box marked us. So I think it’s useful to try and empty the box marked them and fill up the box marked us”.

And I would add that if everyone of us do it sincerely for themselves so everything will be better, easier, lighter and kinder… 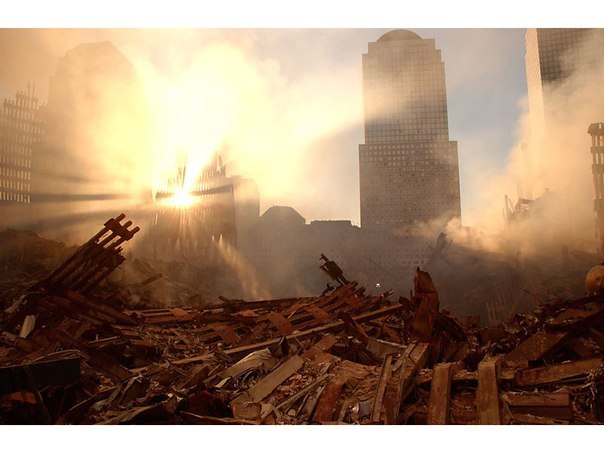 Bruce Springsteen – My City Of Ruins